I sent him a message last night, and it took him a good 12 hours to get back to me. Look out for the sorry. 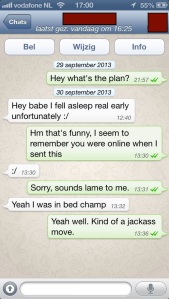 Yeah, he really gave a damn. Needless to say he never replied to my last comment. I kind of wanted to add something saying that if he wanted a fuck, he better up his game. But hey. This is a step for me as I never call men out on their bullshit.

I’m so fucking angry with myself right now. Because I fell for it again.

Mr. Fiji said he’d like to make up for his cancellation and take me for drinks tonight. I gave it some thought, discussed it with my friend Selma who said screw him, and decided to meet him. He’d come to my city at 9, and I told him to let me know when he arrived so I could pick him up at the station. All good.

And as I am writing this, I am obviously not on a hot date. I had showered, dressed, put make up on and the whole she-bang, and waited. At 9:30, I sent him a message. He saw it. And to this point, he’s not replied. So it’s 2 hours later, and I’ve changed into my PJ’s. I am so fucking upset that he’s another one of those assholes that goes no-show and I’m left feeling like an idiot.

I can’t wait to hear what the lame excuse is and to give him a piece of my mind tomorrow. In the meantime I need to calm myself down because I won’t be able to sleep like this.

When will I stop doing this to myself?

I’m in the middle of one as we speak. Let’s back it up, shall we?

Anyone remember the rugby player from Fiji I was talking to online? Well, he’s been very hot and cold. We’ve tried to meet up twice, and he cancelled very last minute both times. With valid reasons that were actually true (he’s added me to his facebook and instagram) but still. Not into that. We had decided to meet up again tonight for a drink. But this afternoon, I sill hadn’t heard from him (as usual). So I sent him a note, to which he replied: ‘Probably not babe, I need to stay off the beer’.

Ok. 1: They do serve other beverages at bars. 2. I am not forcing beer down your throat. 3. What the hell kind of lame excuse is that? So I told him that I wasn’t into the yes no maybe thing, and that we should leave it. He was quick to apologize, saying he just moved here (no you didn’t) and that he needed time to settle but that we’d meet up for sure. Whatever.

So here I am, in my sweats on the couch, when my facebook messenger goes off. ‘Do you want to come over tonight?’ Well hello. Bootycall, anyone? I gave it a few minutes of thought, and then told him I can’t tonight. Really, I want to, I really do. He’s so fucking hot. But I am trying to be better. (And I’m on my period, which is actually the real excuse). I asked him if he was feeling lonely, to which he said he just wanted some company, and told me again to come over. I imagine he usually gets away with this stuff, so I’ll give him a bit of a hard time. I have no choice, as much as I wanted to!

Also, Louis is totally on again. I had to tell him again I wasn’t about to have sex in the bathrooms at work. Apparently he wants it so bad he wants to come to my house again. Last time we’d talked about it, he found it awkward. Guess something is eating him. I cancelled on him for last week though. Not sure if I want to do that whole thing again.

Look at me! Being such a good girl.

Louis. The colleague that cheated on his girlfriend. With me. And that’s exactly as classy as it sounds. I hadn’t contacted him after I returned from the US 3 weeks ago, and since I hadn’t heard from him either, I figured that was the end of it. Wrong. I got a text from him on Monday saying that he was just back from holidays now. We texted for a little bit, he tested the waters, I wasn’t so into it as I had been. Yesterday I had a meeting in his building and I didn’t see him, but an hour later I received a text that read “you shouldn’t wear those jeans if you don’t want them to be taken off.” It made me smile, but I think I’ve cooled off from the whole thing, and I am kind of surprised he hasn’t. What the hell is wrong in that relationship?

Also, life is hard when you fuck up. John is a dick after all. I ran into him a few times this week. He was alone, I was alone, and he completely ignored me passing by an a deserted hallway. Nice. So tomorrow, we are supposed to go on a group run, and I know he is going. Thursdays is my yoga class at work, but also I want to go running. Though the idea of facing him is holding me back. Just don’t feel like it. So what to do? In my language we have a saying that translates into something like ‘shine for your absence’; and I think I might just do that and go to yoga. At least I won’t make an ass out of myself in front of him and avoid any awkwardness.

Ugh. I just want someone to tell me it’ll all be ok. And I could do with a good hug.

Oh and also; I started talking to a professional rugby player from Fiji online who is just too good looking to be real. If his pictures are for real (and they look like it) he is way out of my league. But hey. So worth a shot!

You remember John. The one I shouldn’t have. I never used to see him at work and yet this week, I’ve run into him three times. Hello’s exchanged, no biggie.

Yesterday, I sent out a group email to my relay race team to ask for their leg times as I needed to compile them for a sweepstake. (Anyone wanna take a wild guess at who the slowest runner was?) So the answers start trickling in, as did John’s. He had avoided the ‘reply to all’ and sent me a private one to say that he had delegated the task of keeping his times to someone more responsible, which would be anyone else but him. I though it was as a positive sign, and sent him a ‘responsibility was debatable anyway :)’ email. He replied with a ‘Think the whole team was very irresponsible.’ Full stop. I took it as an asshole way to cut me off and to reprimand me for thinking I could hint at it. Which I wasn’t, by the way.

I took an hour, had a shower, and decided not to be harsh like I intended but send a reply he could take two ways. And lo and behold, he took it well. Maybe I had misinterpreted his previous message. We exchanged a few more about nothings, until 11pm when he said I should stop working as he was going to, and enjoy the last hour of my Tuesday. So I guess we’re on good terms again. Which is good, because we’re all supposed to have drinks sometime soon. Still, I don’t feel so good about the whole thing, I feel like the air is heavy. I’d feel so much better if we just had that drink, got a little drunk, made a stupid joke about it and get it out of the way. How very girlish of me. Or maybe he could just flat out hate me and that’d be clear enough. Hate the hot/cold. Anyway.

Last Saturday, I went out with Selma, who needed to get laid. Her words. She told me it had been two years, and she needed some. I am very much not used to her talking that way, so I was amused, to say the least. We have had conversations about why it seemed easy for me to do whatever I wanted and why I’m not bothered by casual sex, and she’d always said she wished it was the same for her, but she just couldn’t. I guess she got over it. She had spotted a guy she wanted, and then chickened out. And I figured out why she takes two years as well. This woman is difficult! As soon as she’s approached, she shoots them down with sarcasm. Not good. Eventually, I struck up a conversation with the guy at the bar, and at the end of it, he invited himself and his friend over to our table. I gave Selma advance warning, and told her to be nice.

A few more hours pass, and somehow (and this is where it becomes somewhat vague) we decide to go to my house as I live the closest. I am being told, in two separate conversations, that both men are only coming along for me. That’s not good. I’m not even flattered, because the guy Selma’s after turned out be 22, and a whiny little bitch. So I shut him down and focus on his friend. Who’s not incredibly hot, but he’s nice and he has something to say. At my place, a bottle of champagne gets opened and things go downhill from there.

I get summoned into my own bedroom by the friend, and leave Selma and her guy to it in the living room. So the friend is Asian looking, shorter than me and sadly, the small dick prejudice was true for this one. But Oh. My. God. He was incredible at everything else. In one of my posts I’d written that I’ve never been lucky enough to encounter a man good at oral sex. Until now. Seriously, I am still smiling when I think about it. He had too much to drink to get it up, which meant he completely dedicated all his time to me. I am talking hours of oral and hand jobs. I lost count of the amount of orgasms I had. At some point Selma and the other guy left, and I never even noticed. I was dragged all over my own house, and I’m sure I left a trail. Those couple of hours, he was a god. I get weak in the knees just thinking about it now. Lucky me. He woke me up after 1,5 hours of sleep, and this time, got it up. He was still small. And again, lucky me because he was out for anal sex.

Right after he left I got a text from Selma, that she’d finally gotten laid. The whiny guy had taken her home and somehow she’d had the guts to invite him up. Good for her, guess that’s out of her system now. I’d say that was a night well spent! As for my oral god, don’t know his name, didn’t get his number, he disappeared into the early morning, and I am completely cool with that.